There’s an old saying, “It’s not how you start, it’s how you finish”.   That might define the season for Mishawaka this season, but it certainly didn’t apply to Friday night’s NLC showdown at Northridge.  The Cavemen and Raiders both had 1 loss, and a victory meant the chance of a Northern Lakes Conference title for the home team, while the boys in Maroon knew it kept their chances alive if they got a win in Middlebury.  “We challenged our kids right before kickoff…. Prove it,” said Mishawaka Coach Keith Kinder.  “We’ve been talking about being the best team in the conference and prove it out here tonight.  And it certainly helps when you have the best offensive line and the best player in the conference, and we have both of those things.” 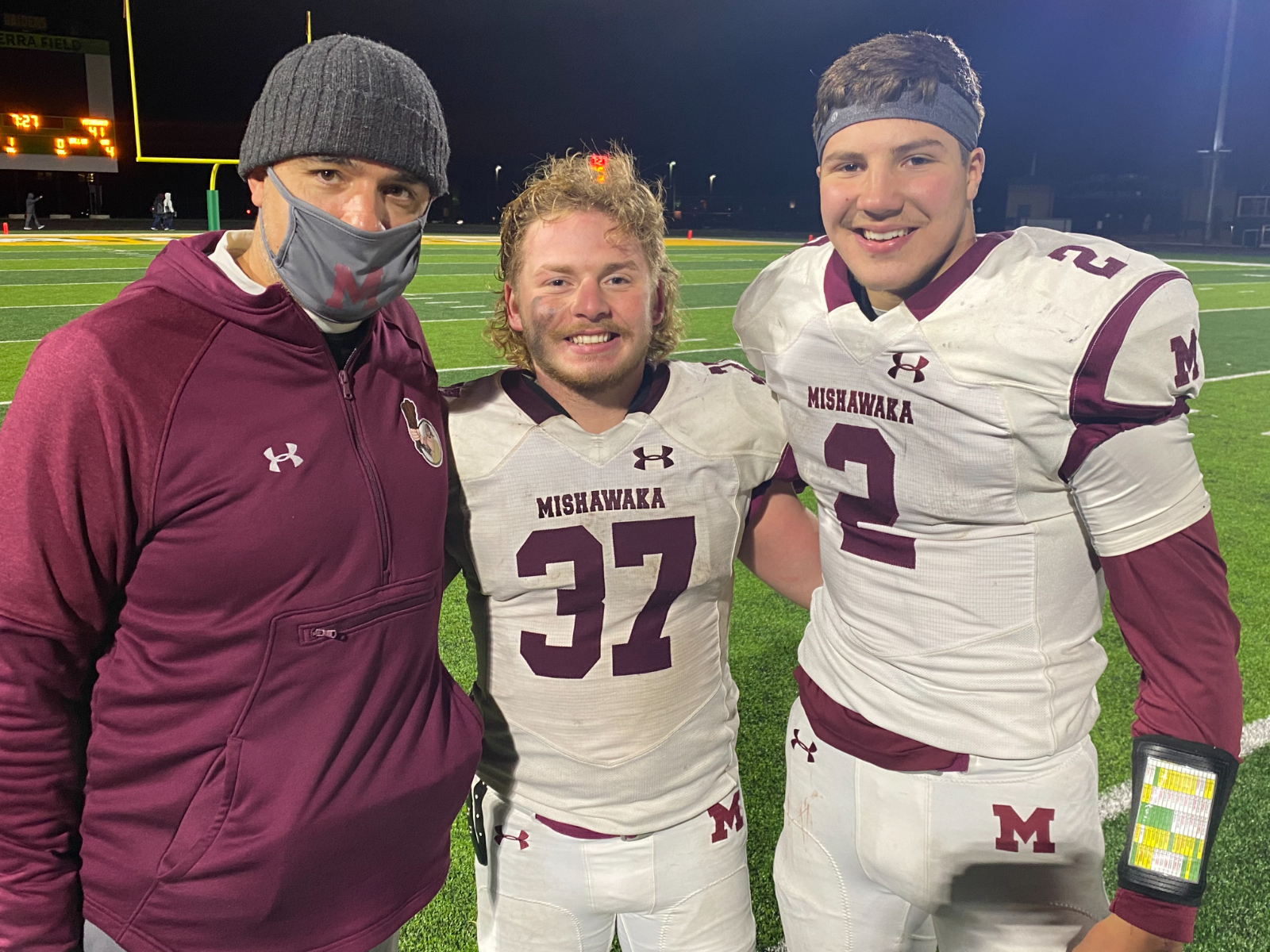 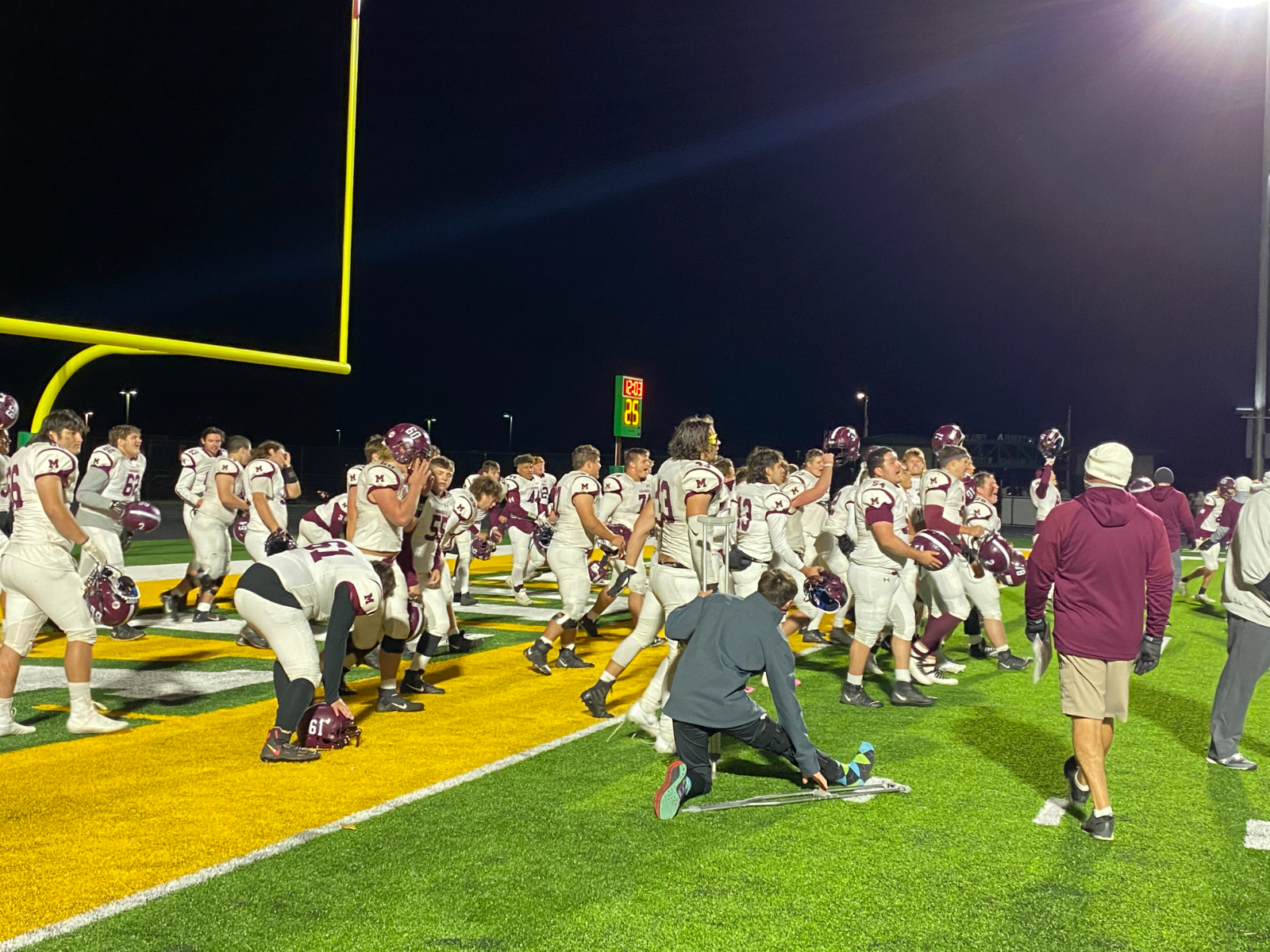 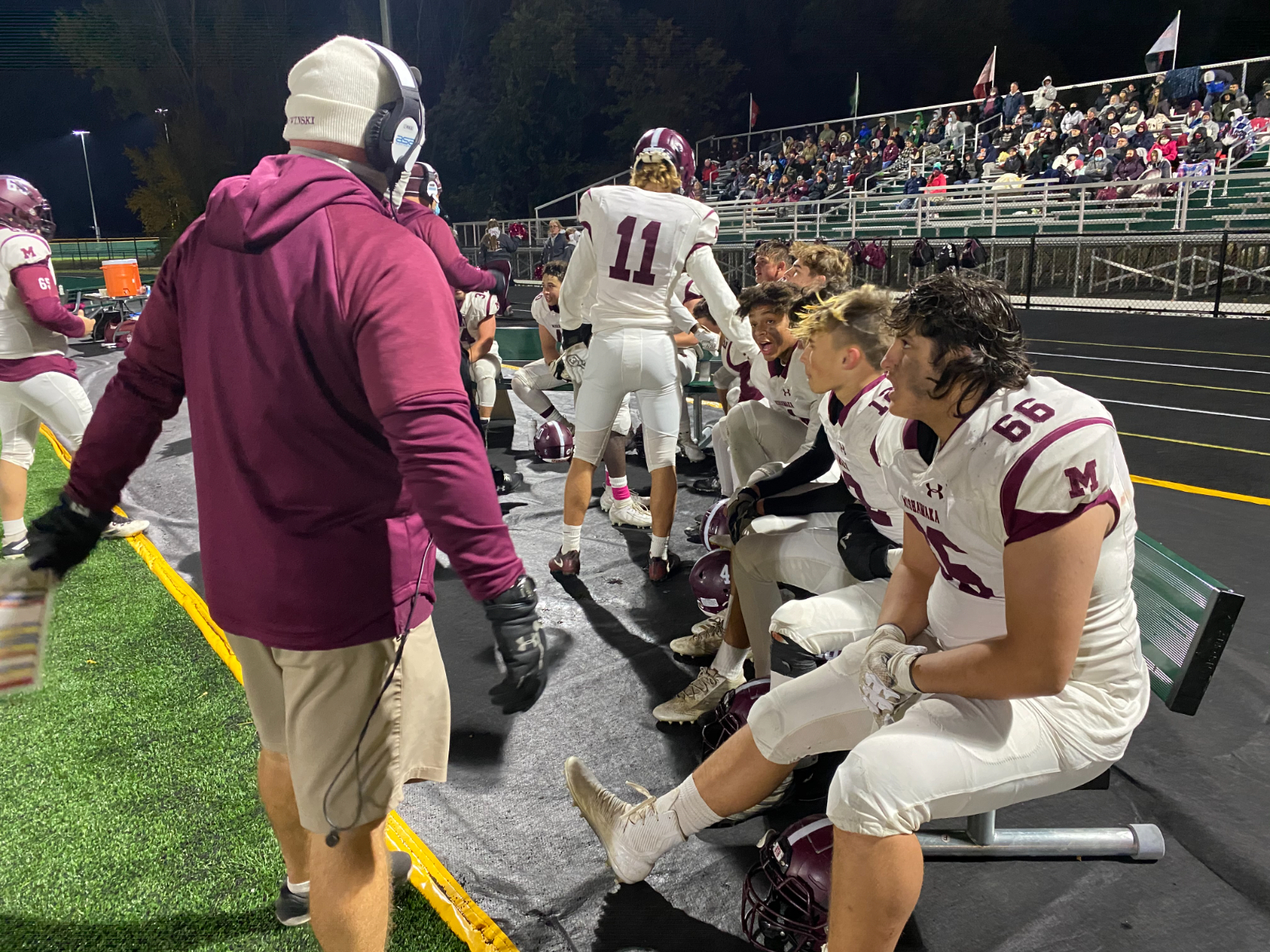 Justin Fisher took the opening handoff 80 yards for a touchdown.  Fifteen seconds into the game, Mishawaka led 6-0.   The 2-point conversion attempt failed.   Fisher scored his 2nd touchdown in the 1st quarter, an 11 yard run off the right side.  Number 2 credited his offensive line for creating the holes and giving him the chance to score.   Fisher converted the 2 pointer to up the score to 14-0.   And then with 10:16 to go in the half, Fisher scampered 68 yards for his 3rd score of the game.  Mishawaka had the Raiders stunned with a 20-0 lead.   4A’s 8th ranked Northridge would get on the board with 6:42 to go in the 2nd quarter on a 16 yard TD run.  And 2:42 later, after a botched punt, Northridge scored again to cut the lead to 20-14.     The closeness would last for just 21 seconds as Fisher scored his 4th TD of the game.  going down the left sideline and bouncing off defenders, Fisher went 73 yards and the Cavemen led 28-14 going to the break. 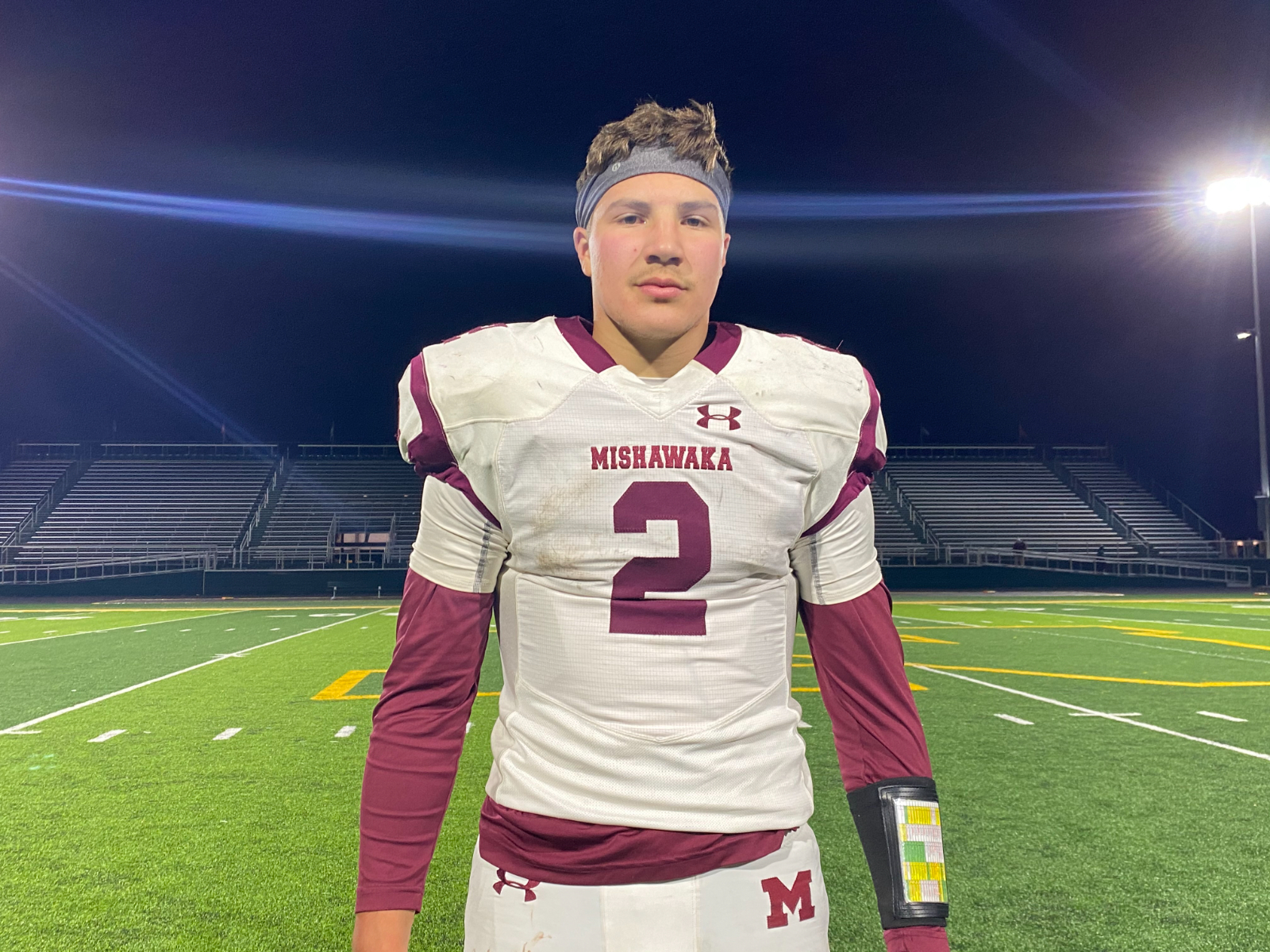 In the 3rd quarter, Northridge touched the ball one time.  The Cavemen defense came up huge on a 4th down play, turning it over to Fisher and the offense.  Talk about a championship drive.  Drew Mason, Fisher and the O-line pounded the ball right at the Middies.  An 11 minute, 21 play drive ended with Justin’s 5th touchdown of the game.  After the victory, Coach Kinder called Justin Fisher “the best player in the conference and one of the top 3 players in Northern Indiana.”  Fisher ended with 297 yards, 5 touchdowns rushing and 1 more passing.  The Cavemen ran for 438 yards as a team, 327 of those came in the first half. 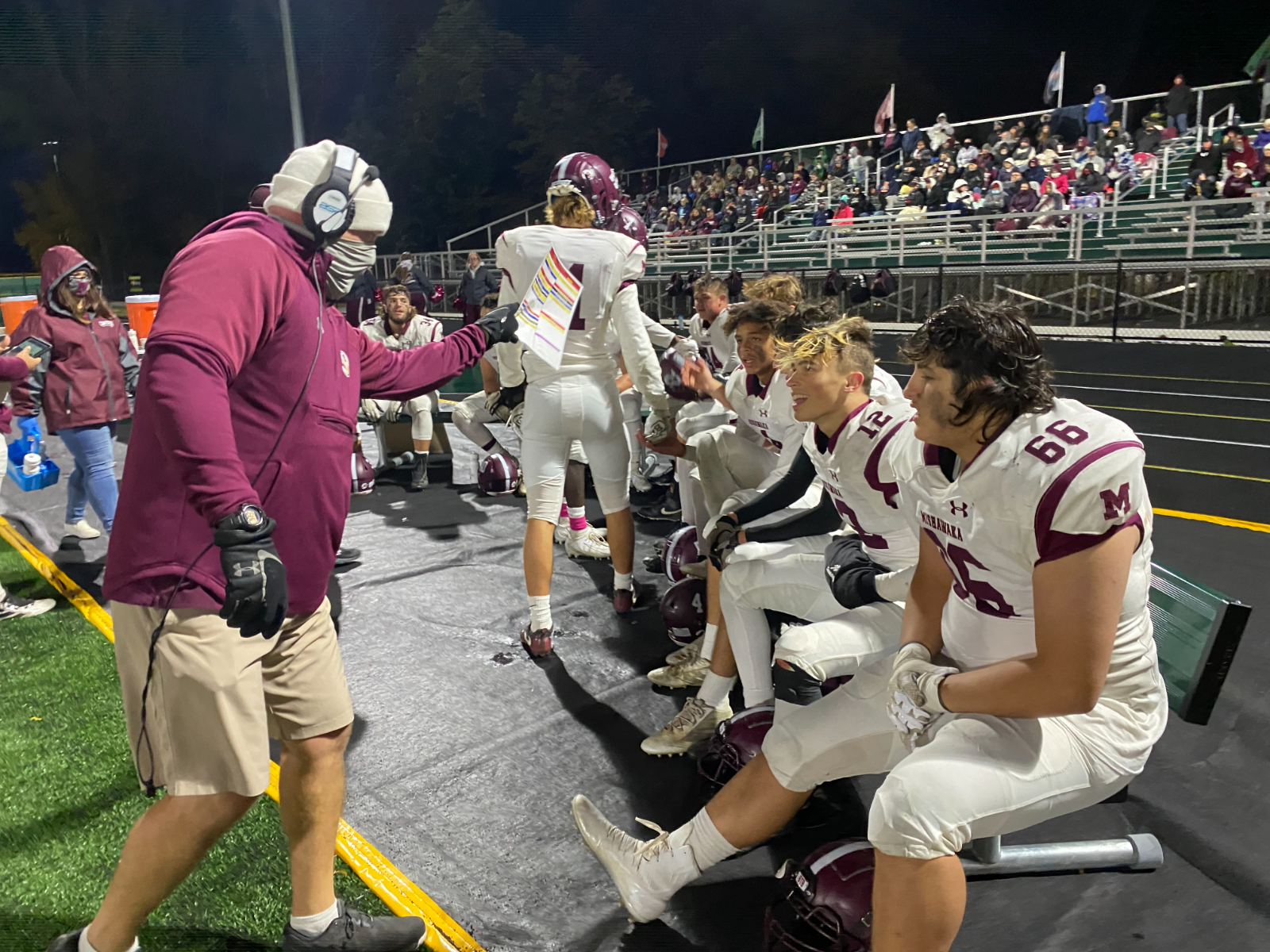 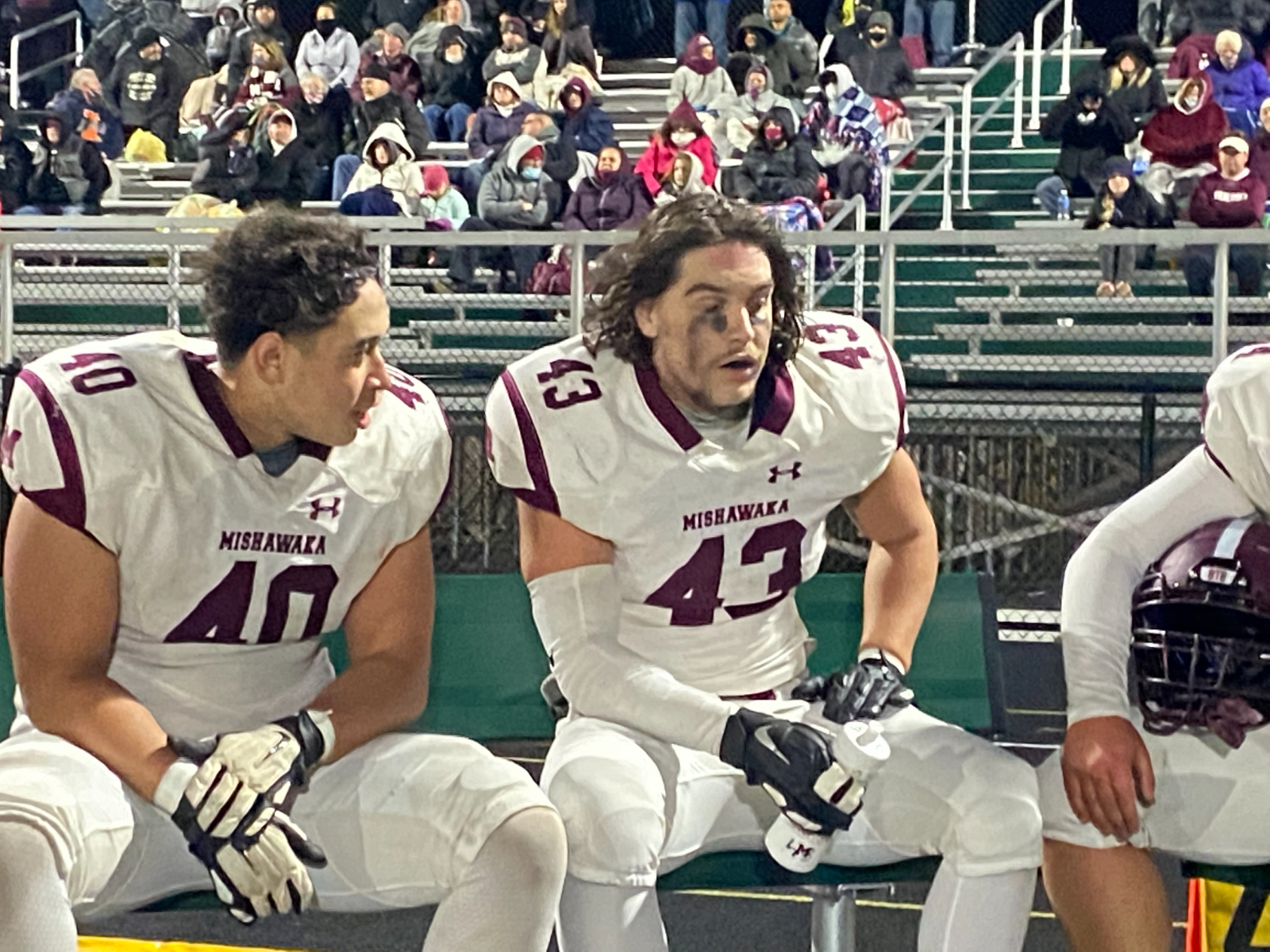 Mishawaka capped their scoring with about 2 minutes to play as Fisher found Mason for a little pass rolling out near the home sidelines and in front of the Cavemen faithful.  The 250 fans allowed at Intera field went wild as Mishawaka won the game 41-21.  The Cavemen are now 5-3 after winning their 5th straight.  In a strange ending to an unpredictable year, it was decided that the Opening round of the Sectional at Goshen on October 30th would also count as an NLC game.  Since Warsaw (7-2, 6-1 in the NLC) beat Concord Friday night, they earned a share of the NLC Title.  If Mishawaka (5-3, 5-1 in the NLC) can beat Goshen at Foreman Field, they will not only advance to the Sectional Title game, but they will also win a share of the Northern Lakes Conference Championship. 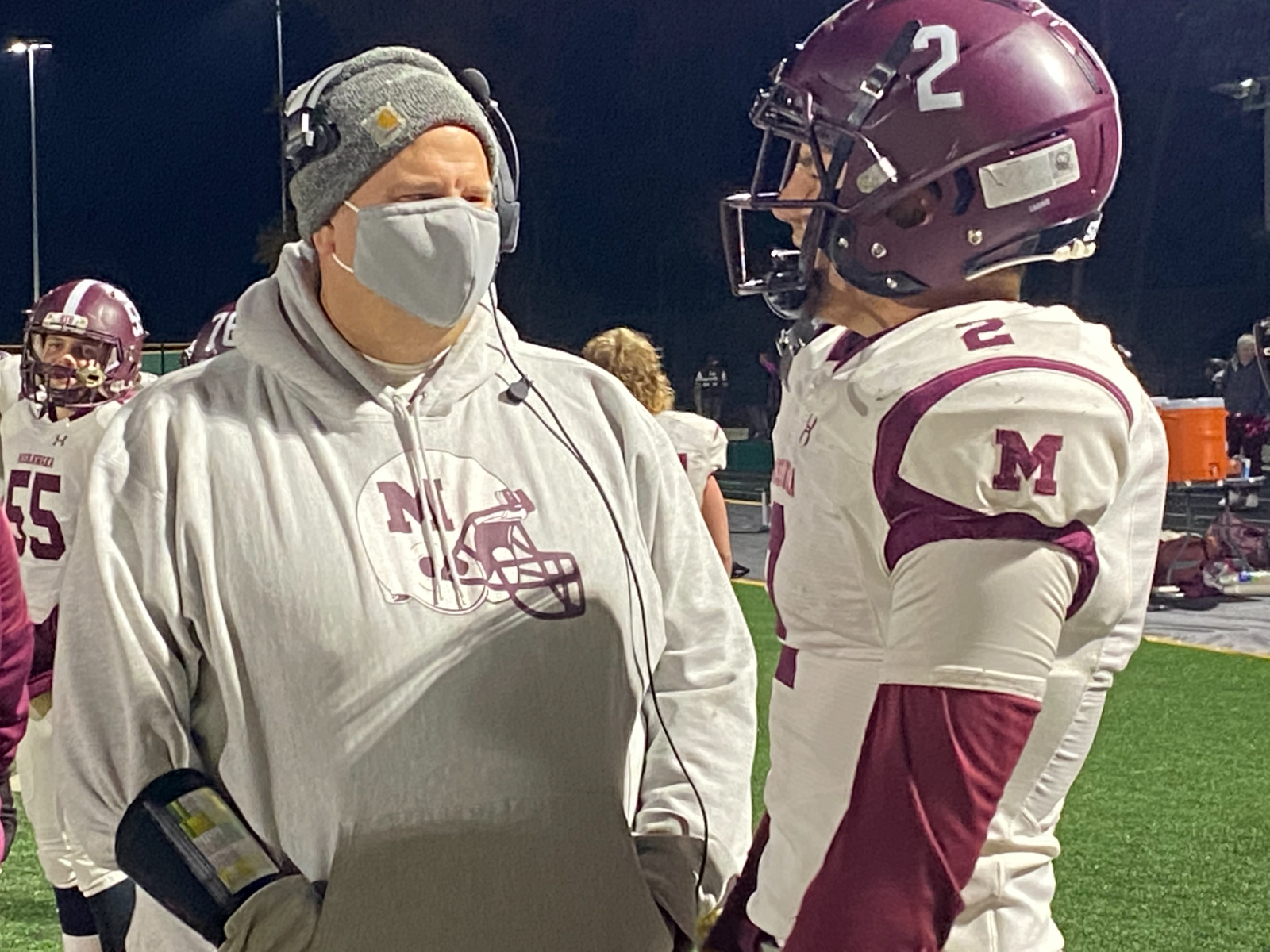 The Cavemen may not have started strong this year, but they sure are finishing.