“He was definitely on a mission.  That kid was on a mission.  Nothing was standing in his way.  He was definitely on a mission.”  Those were the words of Mishawaka Assistant Coach and Mentor Yancy Gradeless.  Thinking back to the adversity his friend and senior wrestler had gone through.  It’s enough to bring a grown man to tears.   The moment Mishawaka’s Joseph Walker won the 182 lb State Championship…. Frozen in time.   He dreamed about it.  He agonized  through the journey.    Joseph Walker.    State Champion! 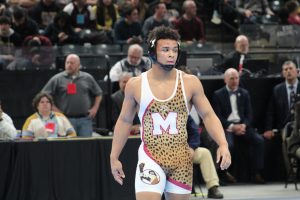 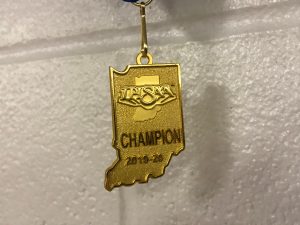 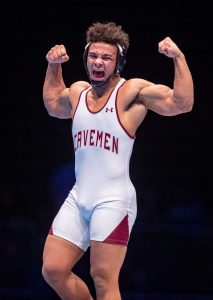 “It’s great,” said the champ.   All these people who stayed behind me.  Kept the faith in me.  It’s a great feeling.”

The perfect ending showed no blemishes Saturday night.   It was the perfect season.   Walker won every wrestling match.   He rolled through the prestigious Al Smith Invitational.   Joe became Most Valuable Wrestler and Champion of the Northern Indiana conference.   He was the Sectional champ, and brought home another title at  the IHSAA Regional.   Walker had prophetic words after winning the Sectional.  “I’m human.  I’m like anyone else.  It’s wrestling and anything can happen., so I just want to go every match and give it my best.”

It’s easy in high school sports to feel like you’re invincible.  And why wouldn’t he.  This kid was ranked #1 in the State.  It wasn’t long ago he signed to wrestle in the Big 10 at the University of Michigan.  Everyone had him tabbed to be in the state Finals under the lights.   His mom Rhonda Walker said, “He’d get out of wrestling practice and he’d come home and run.  He told me, to be a state champ, you have to go above and beyond. You don’t do the normal.”   Gradeless talked about the motivation.   “He got it put in his head that he was going to be a state champion.  And I don’t think he was letting anything or anyone take that away from him.”   His dad William Walker talked about his determination.  “His heart is wrestling.  And whatever means he is going to have to do to win, he’s going to do that.  And that showed up at Semi-State.”

It was three days before Semi-State.   Just a midweek workout that turned out to be anything but normal.   His dad said, “One of the wrestlers came to the door.  And he said, did you hear what’s going on with Joseph.  And I said no.   He said he hurt his ankle really bad.”  Coach Steve Sandefer talked about what he saw, “The entire room stopped.  Joe was crying.  He was on the ground.  We didn’t know what happened.  My heart sank.”  Joseph said, “I was torn.  It felt like a medicine ball just hit me in the gut.”   Gradeless said Walker never stopped believing.  “When he got hurt, he was devastated.  But I don’t think quit was ever in his mind.” 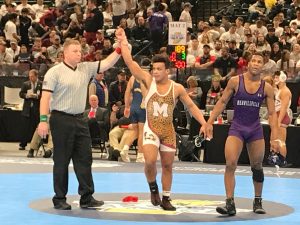 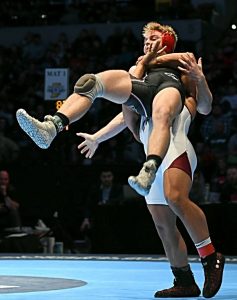 Ironically a guy with the last name  “Walker”, could barely stand.   Joseph’s injury showed itself in the first round of semi-state.  A tough battle.  His dad noted, “Everything we worked for the entire season comes down to these two meets, and then we got injured.”   Mom said about getting through the first round at East Chicago.  “For him to win that was like (wow).  Okay.  Thank God.  That’s over.  And then when he wrestled the next kid, that was even worse because the dad was up there and he was telling the kid to grab Joe’s ankle.”   Walker talked about the agony he was experiencing on the mat.   “Yeah, it was very painful.   The guy I had in the semi-finals kept ranking on it and ranking on it and it was a freshly new wound.”  His head coach said it was hard to watch.  “He couldn’t even put pressure on it.  It was hard to watch.  One of his matches I had to walk away.  But he got the job done.”  Assistant Coach Gradeless said Joseph made believers that day.  “I knew if he could get through that he was gonna make it through state.  I knew his time wasn’t over and it was his time to shine.  If he could make it through that, he could make it through anything.”

So after 6 days of ice, rehab and rest.  Joseph was on the mat at Bankers Life Fieldhouse.  Tough match in the opening round against 38-2 Macartney Parkinson.   Walker looked fresh.  “Joe bounced back.  We had a week of healing in us,” said Sandefer.  “Coming into this week, everybody was positive.  I said Joe if you can get through Friday night, that’s going to be your toughest match.  Obviously it’s the state finals and every match is going to be tough.  You gotta take it one match at a time and wrestle every match like it’s the state final.”   Walker said he kept the faith and so did those around him.  “With God and my parents and my coaches.  They kept faith in me.  I just had to go out there and do it.”   Gradeless was in the corner coaching and cheering on the Caveman wrestler who was wrestling in his last high school match.  “I just told him you got it man.  This is it.  This is yours.  This is yours.  You have it.  This is you.” 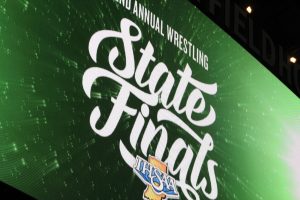 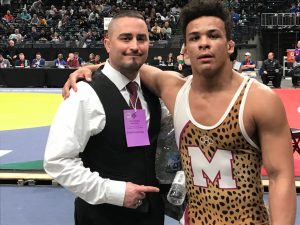 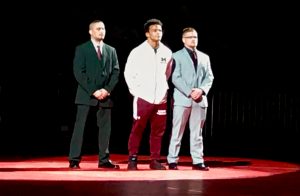 So here it was.  The State Championship.  The moment he worked for his entire life.  People hadn’t seen the ice baths and prayers behind the scenes.  They saw a wrestler take charge and live out the most improbable of dreams.  Mission Accomplished!  Joseph Walker.  The best in the state!

“You get your name on the wall, you’re going to have a picture that says, State Champion,” said Director of Athletics Dean Huppert.  Walker responded with, “Every day in practice I’d see the word state champion.  I was believing it.  Seeing it.  And now it’s here and I accomplished it.”  His mom said, “When he won it, I just jumped up and down and  screaming and yelling.  I was really excited.”  Sandefer said, “I can’t be more proud of Joe.  The adversity he’s gone through the last two weeks.  the amount of heart that he’s shown.  I don’t think there’s anyone else down here that could’ve done what he did.”  Gradeless continued by saying they’ll be able to tell wrestlers for years to come about this story.  “I’ll just say, if he can do it, anybody can do it because he’s overcome some serious obstacles.”  His dad summed it all up by saying.  “He dug down deep.  I’m still in awe of it.  If you put everything together in a puzzle….. It shouldn’t fit like that.  It’s like a super natural thing that happened.  And it happened for him.  And I’m glad for him.” 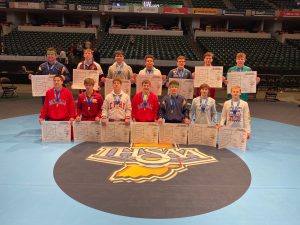 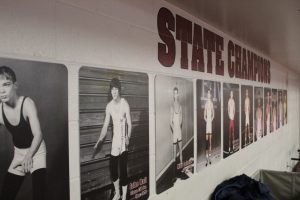 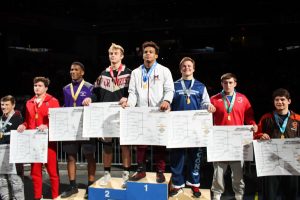