You’ll never hear a Mishawaka wrestler chant “We’re #7”,  but knowing where the program has been, and where it is now, finishing 7th at the IHSWCA Team State is something to be very proud of.  “We went in unseeded and went up against the #2 team that ended up being state runner ups,” said MHS Head Coach Steve Sandefer.  “That’s a tough one to open up with, but it’s good to wrestle those sort of teams to measure yourself and see where you’re at.”   Mishawaka knocked off 7th ranked Avon and lost by only a point to Carmel, who ended up finishing 5th.  “I think it was a confidence boost to our guys, to say hey, we belong here.” 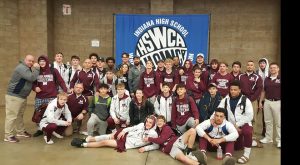 Senior Jacob LaPlace won all 4 of his matches Saturday in Ft. Wayne at State.  “We  haven’t been there since 2010 and we went out and wrestled hard and took 7th.   Seventh isn’t bad for not being there for 10 years.”   There were 32 teams representing three classes at the team state invite in Ft. Wayne.  Mishawaka has been invited to return after their strong showing.  Cody Timmerman said, “It was a hard tournament and a fun tournament to be at.  Nobody expected us to get 7th, but we did.”

Senior Joe Walker talked about the one point loss against Carmel.   “We lost by a single point and coach took us aside and told us to continue to wrestle hard and get the best place we could get.”  Coach Sandefer told his kids that every time they step on the mat matters.  “One point was the difference in the match, but I was proud of the way they came back against Columbus East to finish 7th.”  LaPlace said this experience should help the team going forward.  “It showed us where we’re at and where we can go.  We’re halfway through the season and it was a perfect time to show us what we can improve on.”