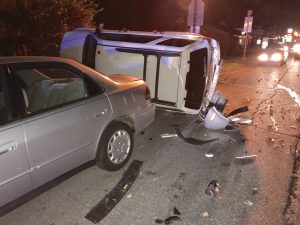 Imagine walking out of work and finding your vehicle laying on it’s side in the middle of the road.  That was what happened to WSBT 96.1 FM’s Sean Stires Monday night.  He had just got off air doing his radio show live from “The Crow’s Nest” high above The Cave, (Mishawaka’s gymnasium) and couldn’t believe what he saw. “I walked out and saw a car in the middle of Lincolnway and  I thought, man, I hope nobody’s hurt.  There was another tuck in the middle of the road rolled over, and then it registered.  That’s my truck“. 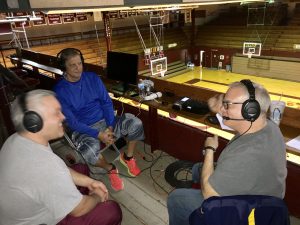 Stires is the play-by-play voice for Mishawaka Cavemen football and basketball.  He also hosts a weekly show with Mishawaka Director of Athletics Dean Huppert called “Cavemen Corner”.   He had just interviewed basketball coaches Ron Hecklinski and Kevin Gradeless and had a great show talking about Mishawaka sports.  Huppert was leaving the school when he saw flashing lights and the wreckage.  “I thought, I hope that’s not one of our kids.  It must’ve just happened because when I got there the police hadn’t arrived and the scene was still a little confusing.”  That’s when he saw Stires.  “Are you ok”? said Huppert.  “Yeah” said Stires.  “I just came out and that’s my truck.  They just said the guy who was driving took off running”. 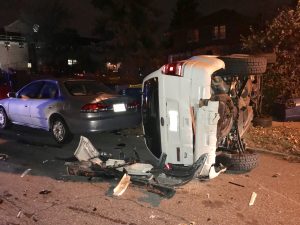 The accident was witnessed by Mishawaka Basketball Manager Carissa Mossell.  “I was looking out the door and I saw a car swerving and then all of a sudden it hit the white car”, said Mossell.  “The car went sliding to the middle of the road and the white car flipped twice in the air and landed on the back of another car.  My first instinct was to run out there and make sure nobody was hurt.  When I didn’t see anybody, I ran back in here (The Cave) and this gentleman was walking down the stairs, so I asked him to call 911”.  The gentleman turned out to be Stires. 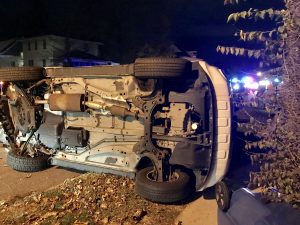 Gary O’Dell from Gary’s Barber and Style Barbershop was inside his house when it happened.  “He had to have hit it square.  I heard a big Boom inside my house.  I looked out and saw a guy kind of jogging away”.  The driver was a 54 year old Osceola man  going west on Lincolnway.  He was later arrested  for leaving the scene and hit and run.

The area where the accident occurred has been a construction zone since the beginning of the school year.  Work on the school’s roof is underway and the area is clearly marked with signs,  pylons and barricades.  The road goes from two lanes into one near Campbell Street.   The driver’s Volkswagen Jetta hit Stires Ford Escape in the back hatch ramming it into another car driven by  Mishawaka girls basketball player Alivia Jachimiak. “It was really scary.  My car wasn’t as damaged as I thought.  But it was scary to see that car flipped over next to my car” said the Mishawaka Senior.  Luckily, neither Stires or the Jachimiak were in their vehicles at the time.   Jachimiak said she was glad coach didn’t cut practice short while Stires found out that had he walked a little quicker coming out of The Cave, he might have been in harms way.  “I was probably about a minute away from it.  They told me it just happened when I came out”. 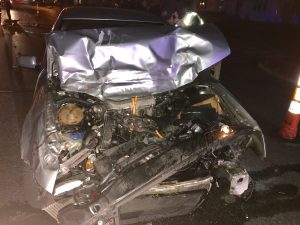 You can hear Stires on WSBT 96.1’s Sportsbeat and calling all of Mishawaka boys home basketball games.  The Cavemen will be on the air Monday December 11th when the boys and girls play Bremen at home.  Instead of broadcasting from the “Crow’s Nest” high above the floor.  Stires will be on the opposite side behind the scorers bench.  And he promises to find a new parking spot the next time he comes to Mishawaka. 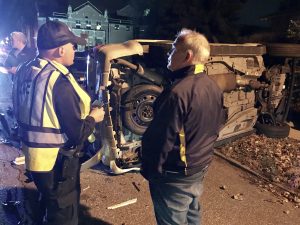